Home>Blog >What Exactly is the Ice Bucket Challenge? 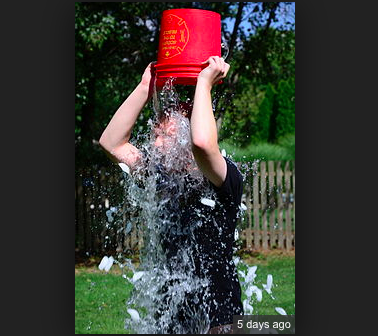 What Exactly is the Ice Bucket Challenge?

Have you been challenged by your friends and fellow Facebook followers to dump a bucket of ice water on your head? If so, do you even know what it stands for? Many times, when something such as the ice bucket challenge goes viral, people tend to lose sight of why they are taking the challenge and what doing so supports. In the case of the latest internet craze, the “Ice Bucket Challenge” is in support of ALS, or amyotrophic lateral sclerosis and encourages donations to research.

The Ice Bucket Challenge has gone viral and supporters are saying that it is raising awareness and significant amount of money. Here in the UK, the challenge is in support of the Motor Neurone Disease Association.

To break down exactly what the Ice Bucket Challenge is, we will look at the rules of the challenge first. The way the challenge works is that if you are nominated, you will have 24 hours to either douse your head with a bucket of ice water while having it filmed, or make a financial donation the charity of choice, with MNDA being chosen in the UK.

After you complete the challenge, you are then required to nominate someone else and the challenge starts over with them. They will have the same amount of time to either film themselves being doused with a bucket of ice water or make the charitable donation. This repeats the cycle as the nominee must now challenge someone else.

The Ice Bucket Challenge is all in good fun but people need to remember that it is also for a good cause and even if they accept the challenge and douse themselves with the frigid water, they should still make the donation to the charitable organization.

Social media has really helped launched the most recent iteration of the Ice Bucket Challenge, even convincing many A-list celebrities to participate. So far Justin Bieber, David Beckham, even Sir Patrick Stewart has accepted the challenge and made a financial donation to the charity as well.

Watch out for challenges ending up in your Facebook messages soon, you could be the next in your circle of friends to be nominated. Remember, the Ice Bucket Challenge is all in fun and it supports a good cause, but participants must remember to remain safe while performing the challenge. There have been stories of many participants’ assistants falling off of ladders while pouring the bucket and other participants falling unconscious due to the ice cold water hitting them suddenly.

So go get your bucket of ice water, find a friend willing to pour it on you and have someone film it. Your challenge could be the next Facebook sensation, or it will at least give your mates something to laugh about!

At Social Buzzing we haven’t received any nominations…. Yet!